Music from the Movies

(IN NO PARTICULAR ORDER)

“How to Train Your Dragon” - John Powell

I started this year with a goal, a resolution; and that was to watch every animated movie included in the Walt Disney Pictures filmography. I couldn't believe how long it had taken me to see classics such as "Sleeping Beauty" and "Dumbo" for the first time. Some movies I ended up adoring, while others didn't quite live up to the hype after all these years. Regardless of my own thoughts on each individual film, the entire year of discovering new favorites has been a joy, a very inspiring look at the world of cinematic achievement accomplished with the talent and creativity that makes these works of art truly look and feel magical.

* Only watched half or parts of the film
** Don't remember any of the film, even though I know I've seen it (so it doesn't count)

1. Snow White and the Seven Dwarfs

While they might not be considered the best films from their respective studios by some critics and film historians, these are my personal favorite animated films. Some films I grew up watching and others I just recently saw for the first time. Whether it's my nostalgia kicking in or a new-found sense of admiration for the effort put into their production, these films are, to me, the best. 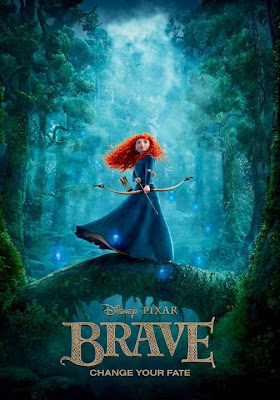 "Brave" is a great movie. Let's just start with that.


It's also a first for Pixar Animation Studios. It's the studio's first film featuring a female lead and a story written with a classic fairytale twist. Showcasing innovative animation in an age when femininity graces the screen with more power and dignity than ever before, "Brave" triumphantly utilizes its female characters and embraces its supernatural elements.

A film that captures a magical essence present in most of the studio's previous twelve films, "Brave" also sets out to distinguish itself from the rest of Pixar's filmography by emphasizing its unique qualities.

It's official: I'm looking forward to DreamWorks Animation's "Rise of the Guardians". From what you can see in the latest trailer, it looks amazing. The studio has really stepped up their game, both in story and animation, starting with 2010's "How to Train Your Dragon".


This particular story might come as a special treat for the child in all of us. Not that animation is specifically for the younger crowd, I'd rather not generalize the medium, but the characters and plot presented might appeal to those of us who grew up with a more familiar connection to these figures. Besides Santa Clause, or in this case "Nicholas St. North", who is undoubtedly the most recognizable of the bunch, I doubt many kids nowadays even know who characters like the Sandman are. Sure, most people have Christmas carol playlists continuously filling their home with good cheer during the holiday season, but does the average viewer really know the origin of the likes of Jack Frost? Not that that should matter if you're setting out to enjoy this film for what it is, a modern take on fantastical beings, I just thought it was interesting that DreamWorks decided to shine a spotlight in this direction.

Who Likes This Blog